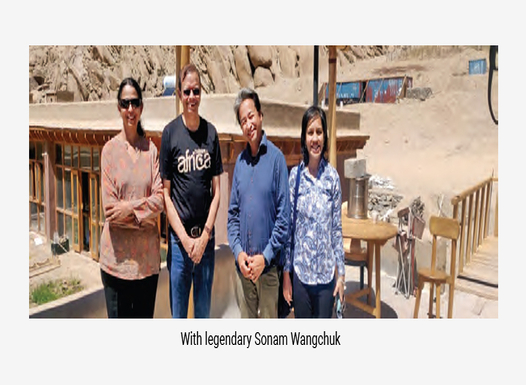 We are living in times when both incremental and radical changes and robust actions are needed to take the nation forward. Meet the folks who carry out this mission

A well-loved philosopher and teacher Joel Barker has a famous line “Vision without Action is just a dream, Action without Vision just passes the time, Vision with Action can change the world”. In the last fortnight, close encounters with two such visionaries who have demonstrated quick and robust action underlined the value of this statement.

The first is one of my favourite politicians, Manish Sisodia. Quick decision-making and a follow through with robust action is the hallmark of the man, as indeed it is with some other political leaders like Omar Abdullah, Jyotiraditya Scindia and of course, Prime Minister Modi. I recall the day when Sisodia was planning to be in Pune for a day and his office called and said “Sisodia wants to visit your Skills Lighthouse. Can he spend a couple of hours there?” After a magical visit where he interacted with the youth who were preparing for sustainable livelihoods and deep listening to understand the uniqueness of our model, he said “Dilli me karna hai”. Then came Covid but he never forgot and with the financial help of Michael & Susan Dell Foundation, we are preparing the launch of four lighthouses in South, North, Central and East Delhi in the next six months and hopefully re-create the magic.

What further endears the “vision with action” faction is their approachability. Passing through Delhi on the way back from Ladakh, I asked for a meeting which he immediately agreed to and met us on the dot of the appointed hour. In spite of his super heavy schedule, he seemed to have all the time to chat with us about progress, help us remove roadblocks and demonstrate his deep understanding of the opportunity that lay before us. A very similar experience to the one my colleagues Amruta, head of our Lighthouse programme and I had a week ago in Leh when our hero for Education, Skills and Sustainability, Sonam Wangchuk, met with us. He spoke about his vision to address the needs of the people of Ladakh and extend his new thinking to all people from the hill and mountain territories of the country.

For the uninitiated, Sonam was the icon on which the character of Phunsukh Wangdu was created in 3 Idiots and the school where the character of Aamir Khan retreats after the college-era is none other than the school founded by SECMOL (Students’ Educational and Cultural Movement of Ladakh) which he founded in 1988. The school was meant for dropouts from the traditional system and has enabled multiple stars including much of the Indian ice hockey team to emerge through its unique combination of inspired innovation, education and “atmanirbhar” activities.

Unwilling to rest on his laurels, Sonam Wangchuk has embarked on an even more ambitious project-HIAL (Himalayan Institute of Alternatives Ladakh), which will enable students and delegates from everywhere to move away from the classroom and learn by doing good projects alongside the local Ladakhi people. Learning will be facilitated by local practitioners in addition to industry experts and academicians, enabling them to develop sustainable models such as natural earth building passive solar houses that are eco-friendly and energy-efficient with low-carbon footprint.

“When you encounter rare folks with a great vision, it is truly worth understanding their motivations and their unique abilities to make the change happen”

When we met Sonam at the project site of the HIAL campus, he had just finished teaching a class. He explained to us how the work on eco-friendly construction could help the Indian Army all over the territory. These buildings are being constructed by HIAL graduates and practitioners. And his young team including a recent MBA from Symbiosis, Pune, was willing to spend quality time explaining their unique concepts, the practical utility and the new ways of learning that would make HIAL truly unique. The 125-acre campus, hugging a mountain near Phey village where the SECMOL School is located will be one more amazing offering from an engineer turned entrepreneur par excellence. If you think about it, you will find that every young person wants to be known as a visionary. Martin Luther King with his “I have a dream”, Mahatma Gandhi with his Quit India movement and statements like “Find purpose, Means will follow” are the role models of millions but spare a thought for Neil Armstrong who too took “one small step for man, a big leap for mankind”. Narasimha Rao whose term as the Prime Minister proved to be watershed years for the economic renaissance of the country and even political figures like Uddhav Thackeray, MK Stalin and many Commissioners of Pune city who are averse to talking but demonstrated robust action when the time came to stand up and be counted. To twist an old cliche, they also succeed who talk less and do more.

When you encounter rare folks who can see a great vision, share it with their chosen vision community and lead from the front when the time comes for robust action, as Manish and Sonam are doing today, it is truly worth understanding their motivations and their unique abilities to make the change happen.

We are living in times when both incremental and radical changes and robust actions are needed to take the nation forward. Let us make it happen.