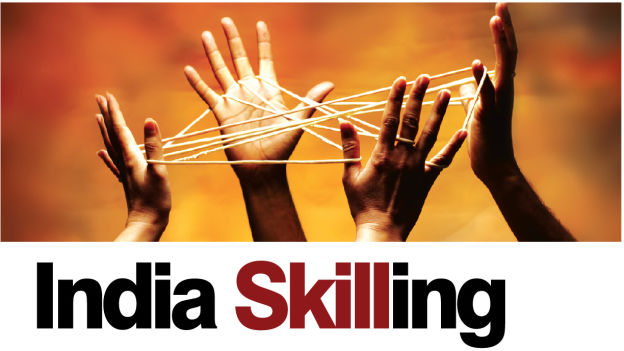 When one talks of a fully skilled India, the enormity of the challenge of getting job ready skills to a population of the size of our vast country can be daunting at first sight. However, a concerted effort to build on the many yeoman efforts made in the past and utilize the institutions that exist on the ground can show the way and appropriate use of Information and Communications Technologies (ICT) will enable shrinkage of time and space distances and make the challenge feasible!

There are three existing enablers that need to be effectively used in addressing this challenge. The first is the National Skills Development Corporation (NSDC) which has addressed the task of skill building in a very scientific manner, setting up Sector Skills Councils to define job roles and qualifications packs for a large number of employable areas and identifying training and assessment partners to ensure quality and reliability in the process. The second is the large number of Common Service Centers (CSCs) that have been put on the ground in all parts of the country, which are intended to play roles beyond facilitating Government to Citizen services and are already, in some states proving to be an effective way of accessing information and availing simple services. The plan to cover all of India’s 600,000 villages and 250,000 plus Panchayats in the next CSC expansion and the National Broadband Mission to make connectivity available to all Panchayats will create the backbone of fiber that can be judiciously used for any large program that is now envisaged.

The third and probably the most potential multiplier force is the availability of tens of thousands of crores of deployable corporate funds that will be released under the newly promulgated two percent of profits to be deployed in CSR. While consultants and internal strategy planners are weighing options to spend these funds for maximum real and some corporate benefit, the solution lies in the speech made by Prime Minister Modi to the IT industry, when he was still “Candidate Modi”. He had suggested a massive collaborative effort to keep children in school and pave the way for a skills revolution in the country. The National Digital Literacy Mission (NDLM) is the industry’s response to this.

In its most elementary form, the NDLM will target to impart basic capabilities in lakhs and then millions of crores of Indians to access data and information that enables better work and life and disseminate the information and knowledge so gathered to the most active user in the shortest possible time. Digital Literacy is not to be confused with IT literacy because it will touch the life of farmers, fishermen and every other citizen in the country. The power of the mission lies in its simplicity, because every computer or smart phone can be enabled to provide this training, from corporate sponsored NDLM centers to municipal and private schools where computers and smart classrooms are already deployed, to public post office and libraries. The CSC network, enabled by a common program, methodology and curriculum and the active participation of industry and civil society, should be the right vehicle to accelerate the digital literacy movement. The allocation of funds for the first phase of the project is an encouraging precursor to the larger Public-Private Partnership that can and should emerge. The vision of digital literacy that one member of every Indian family, a target of two hundred million plus citizens, should be armed with access and dissemination skills in the next few years is massive but attainable.

Digital Literacy in the medium term should prove to be a means and not an end in itself. With the National Occupational Standards falling into place and the Vocational Education Framework providing credence to Vocational skills as a pre-requisite for jobs as well as providing entry paths to formal education and degrees, a massive skills movement can be layered on top of NDLM, attracting and enabling tens of millions of digitally literate Indians to be assessed for aptitude and trained in the NDLM centers and other special purpose skill building institutions to acquire and be certified for job roles in Manufacturing, Retail, Healthcare, Financial Services, Telecom , IT and many other areas.

Skill building campaigns in the past have not met with the success they needed because it could not be placed in the context of employment generation on a mass scale, Today, with the expectations of India having been raised to unprecedented levels and many plans afoot by Government and Private sector to invest in infrastructure, manufacturing , agriculture and services, the National Digital Literacy Mission, if embraced, adopted and implemented by all States, industry associations and all corporations as a cause worthy of support can set in motion a series of initiatives and events that will truly set this country on the path to sustainable double digit GDP growth !